Out and About with Michael Huggan

Out and About over the last few months

I have been very busy over the last couple of months, so it's about time I published a new Blog!  For this issue, I will share a few subjects whilst keeping my text and images to a minimum.

I received a phone call from a new client who wanted to me to take photographs of her partner who booked to fly in a Spitfire from Goodwood Aerodrome  in West Sussex.

I met Justin and Paul at the Spitfire base and discussed how I would like to photograph Paul in the Spitfire before and after the flight.  As I would be restricted to staying on the ground, ariel shots were not possible. I did have some reservations as whilst the concept sounded amazing, the reality of getting those special shots is challenging. I did not have access to the hanger, so all images were taken from the public area.

As the day progressed my fears for getting those special shots abated with the help of dramatic Skies and access to the flight area with kind permission of Boutlbee Flight Academy the Spitfire operator. 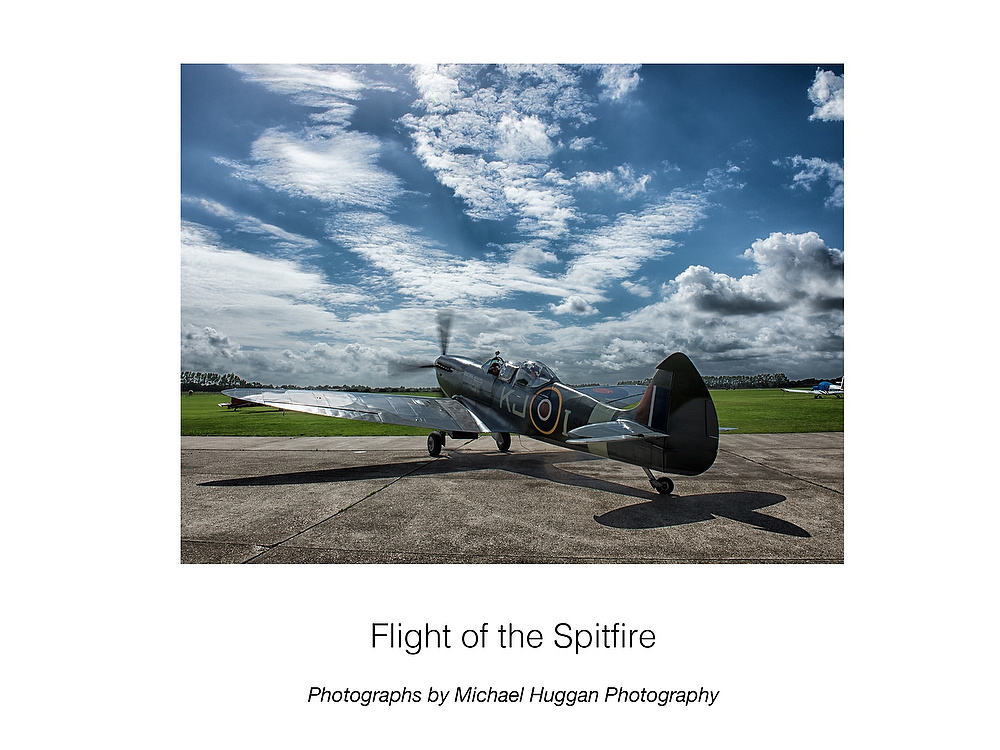 Flight of the Spitfire

This picture is taken from the back cover of the book I prepared for Paul to commemorate his special day in a Spitfire. 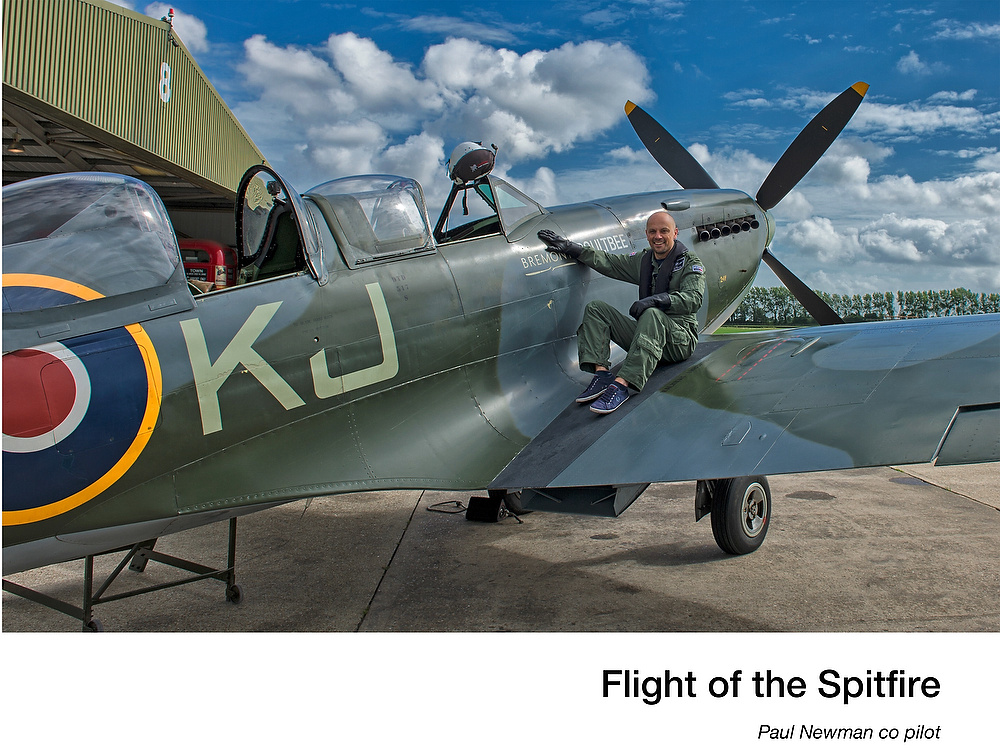 Paul at the end of the day on the Spitfire

The front page of the book with Paul sitting on the wing of the spitfire after the flight.  The book held a total of over thirty images and will be viewed by Paul and his family with fond memories of that special day.

One of my favourite activities is Schools photography, in particular the sports activities.  One of the events I did was a tennis sports championship and I produced a few prints for the family of one of the boys. The Father came and collected the prints and whilst viewing other images in my studio, he proceeded to order several large prints of African Wildlife and a picture of a Cowboy roping a Longhorn cow.  The prints were intended as Christmas presents.  The point here is you never know what to expect.  My images are displayed on my website, but it is not until you see the picture printed you can get that WOW factor.  The lesson here is to keep displaying your images in public, either at shows, exhibitions and other social events.  I show below a couple of the pictures that were ordered. 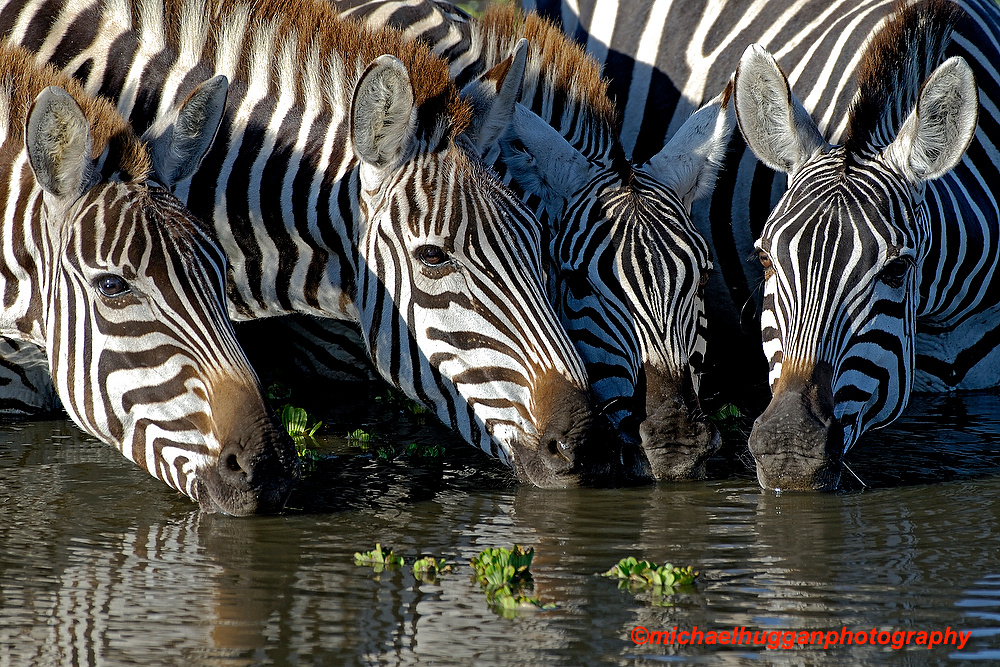 Zebras at a Waterhole

This image of four Zebras doing at a waterhole in the Masai Mara in Kenya is a great favourite and always gets a few comments when on display.  I have this image as a canvas print with a panoramic format measuring 100 cm x 50 cm and looks stunning.  This picture can be bought from my website as a canvas, or a print for framing. 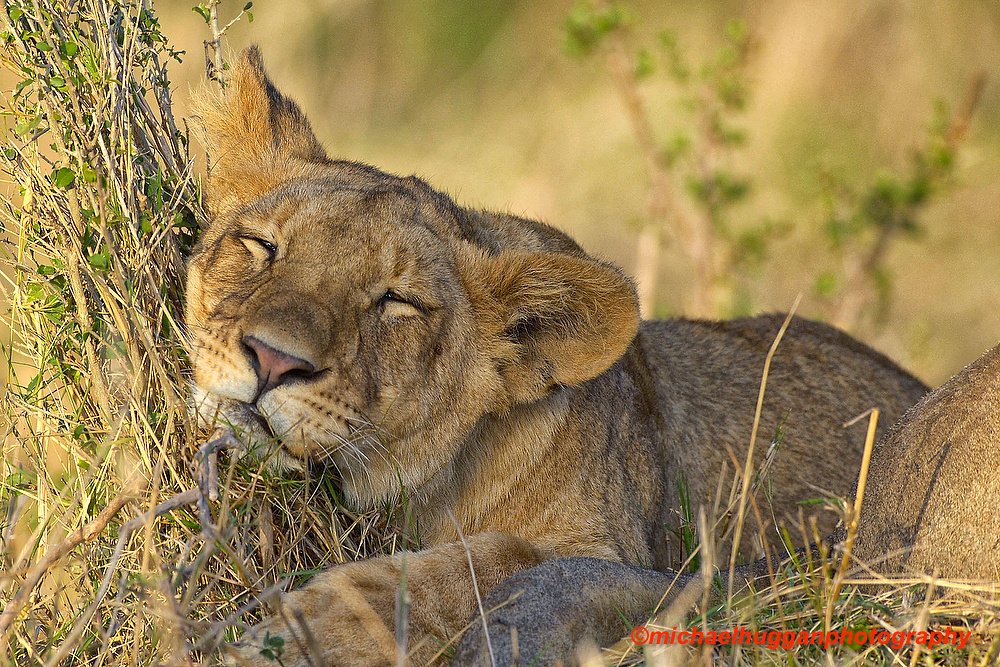 This picture of a young lion sleeping is another favourite particularly with young children.  I have this picture on my wall in a frame. This picture can also be purchased from my web site.

I recently had an opportunity to photograph jump racing at Towcester Race Course, in Northamptonshire with full press accreditation.  It is rare for a photographer not on the race course approved list to get access. I was able to do this via Mark Pain, a professional sports photographer, who arranges such events.  Whilst I have covered many different types of Equestrian events, this is one discipline I have always wanted to do.  Shown below are a couple of images with comments attached. 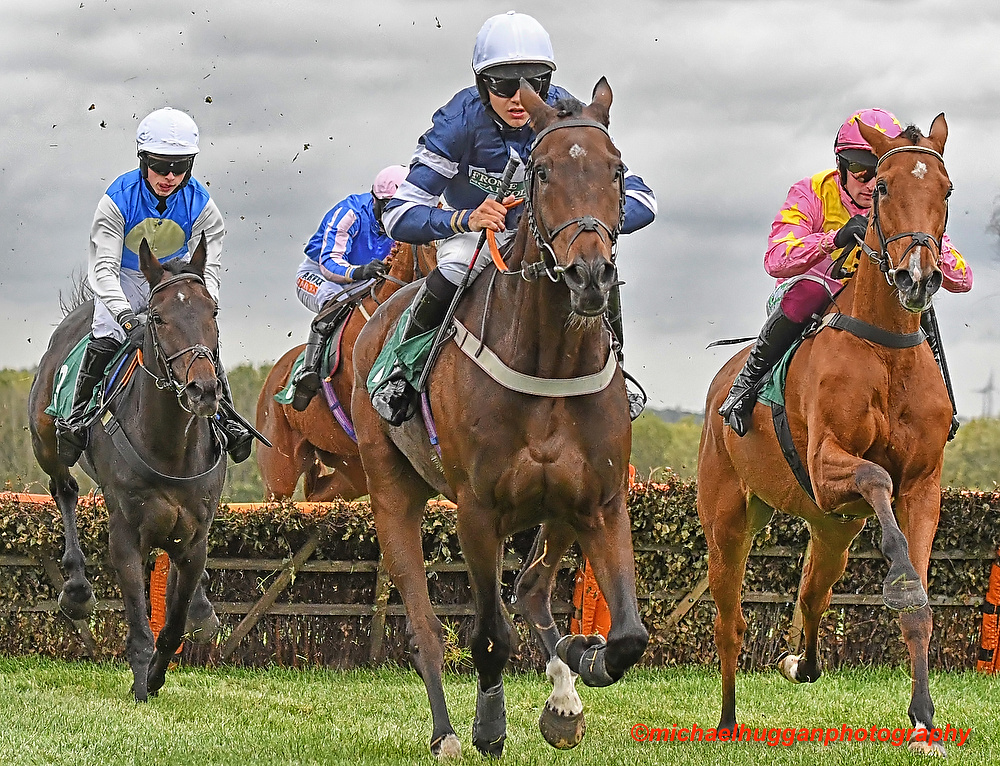 Daniel Sansom on Plantagenet in front at Towcester

In order to get the right action shot you need to get low and shoot up as the riders come over the fence.  Sounds easy, well.... it is not so easy.  Anticipating when the riders appear, whilst lying on the ground,  is the most difficult.  If you wait until you see the riders at the fence and then press the shutter - you are too late!  Also, where along the fence does the first rider appear?  Challenging, to say the least.  There is another factor to be aware of when positioning yourself by the fences, is the possibility the horse, or rider will fall and come through the rail where you are positioned. Something else to be aware of. The above shot was taken at 1/2000 sec at f4 with my Nikon D500, 70-200 afs f2.8 lens at 70 mm with 1600 ISO, manual setting. 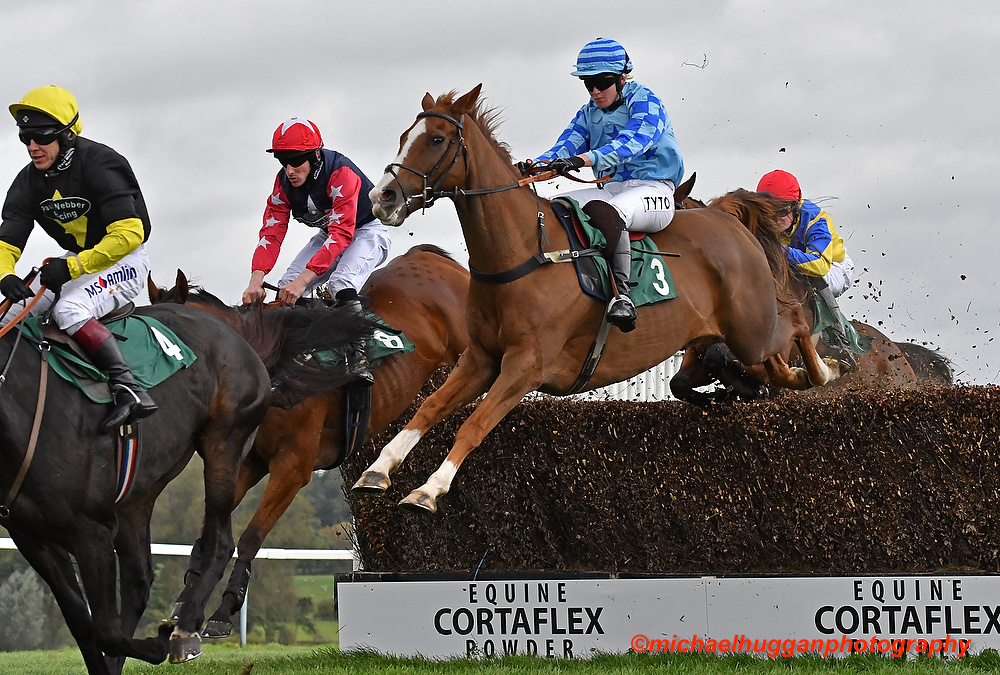 I selected the above shot as I liked the position of the horse (3), as it cleared the fence.  A low level position taken from the other side of the track.  As you can see from the picture the riders jumped the fence from the far side, not the near side.  I did have some help here as Mark Pain, the organiser, gave me an idea where the horses would be jumping.  All help gracefully received. 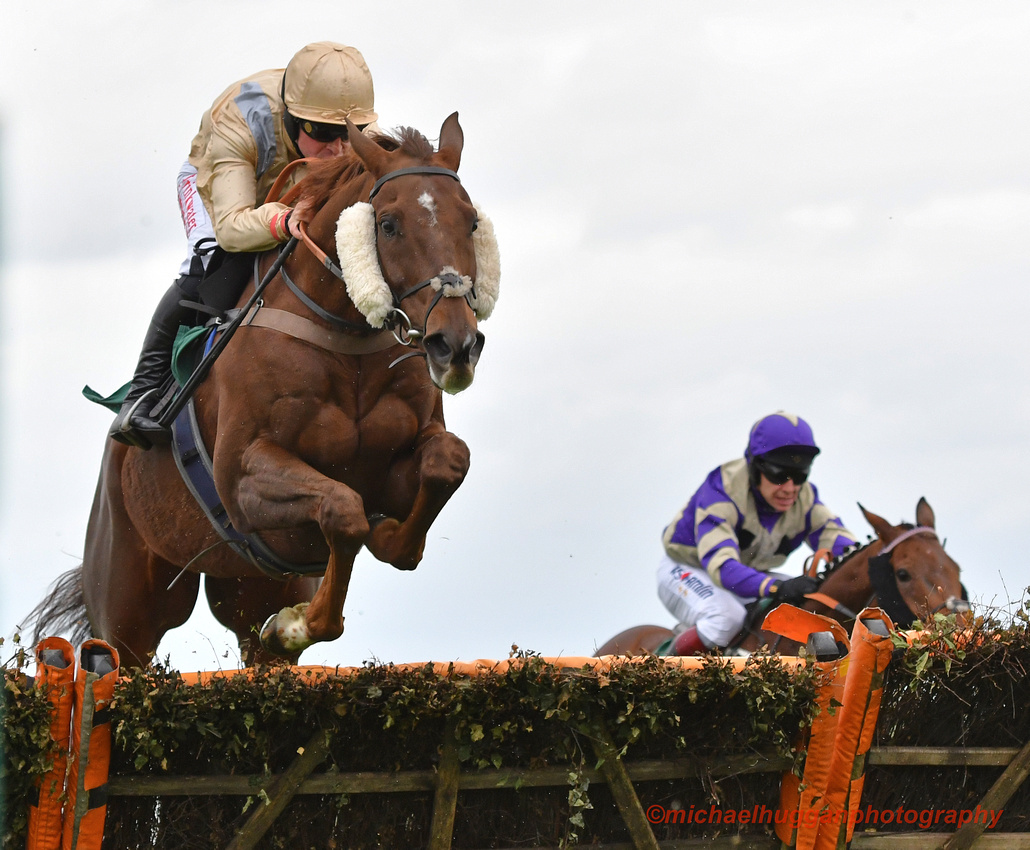 The above shot shows where correct anticipation paid off. I prefocussed on the fence, did not touch the focus button, and fired off a sequence as I saw the top of the jockey's head just before he jumped.  I fired off a 1-2 second burst and selected this shot.  Firing at 10 frames per second does help capture the right shot as the horse and jockey must pass through the zone of sharp focus as it jumps the fence coupled with an aperture of f4 to get a bit more depth of field.

Further images of the jump racing can be seen on my website here.

One of my favourite activities is to photograph Heavy Horses, particularly when undertaking ploughing. The 45th All England Heavy Horse Ploughing Championship took place to very close the where I live at Hartley Park Farm, Selbourne Rd., Alton.  So, off I went to get a few pictures of these magnificent horses. 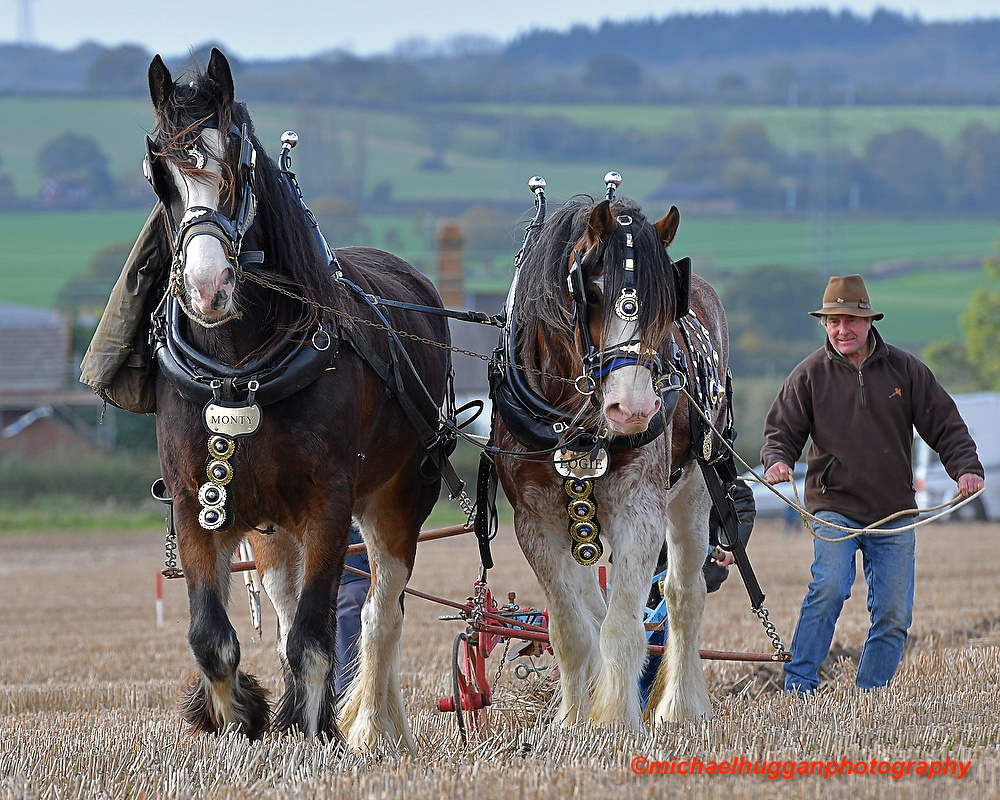 The image above shows Monty and Logie pulling the plough.

I just love this shot of the horses with their feathers swirling around the legs as they pull the plough through the ground.

Further images of the jump racing can be seen on my website here.