I joined Sid Hoole and guests at Circuit en Croix de Ternois in France for a few days testing before the racing season starts in ernest.  Sid owns and runs Hoole Racing & Restoration of Historic racing Cars which compete on the worlds motor circuits.  My intention was to photograph the cars in their garages and testing on the circuit.  Arriving at the circuit on Wednesday morning 8th March to be greeted by howling rain and high winds, this looked challenging, to say the least.  The first car to venture out onto a very wet circuit was Andy Middlehurst in his Lotus 25 in green and yellow livery. Wow! What an impact Andy made driving like the true professional he is, fast and in full control, very impressive. 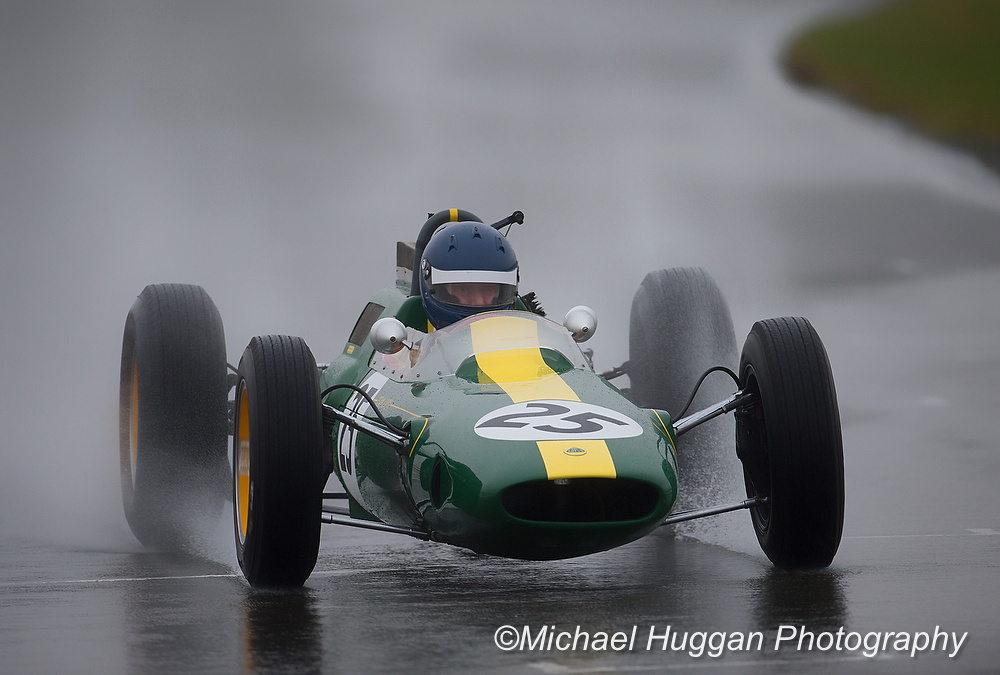 Andy Middlehurst in his Lotus 25

Andy Middlehurst in his Lotus 25 driving through the rain

Photographing the cars at my initial position was extremely challenging.  The best spot to photograph the cars was entering the straight that passes the pits at the top of the circuit where the track was very wet.  However, the wind was driving the rain right into the front element of my 500 f4 mm lens.  After one or two bursts of the shutter, I had the wipe the front element to clear the rain. I can't remember such adverse conditions.  After a while I had to find another location where my back was against the wind to prevent rain ingress on the lens. The rain did not stop for a day and a half!  I wore full wet weather gear for myself and my equipment. I received a few comments from members of the teams; "you must be mad".  I looked like a drowned rat at the end of the first day.  However, I got the pictures! Peter Mullen in the Chevron B19 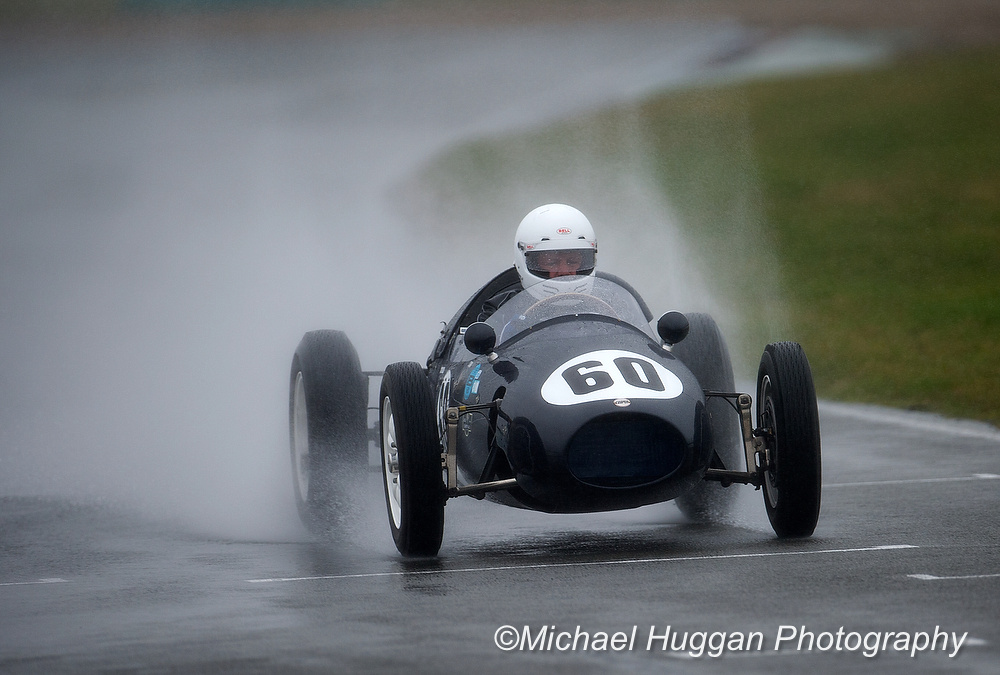 Elliott Hann in the Cooper T41 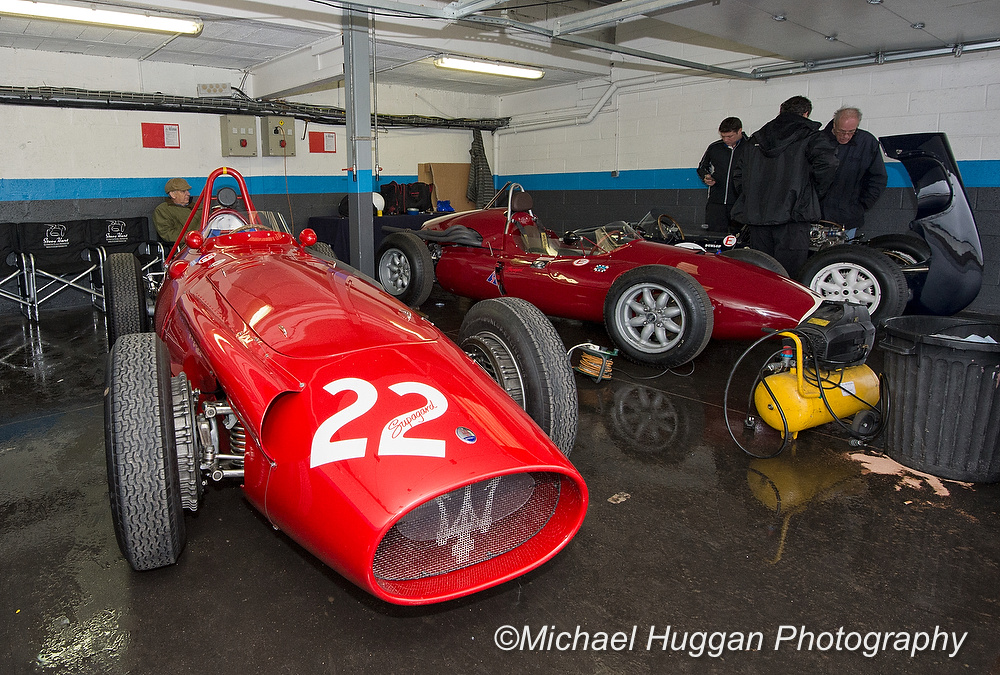 Maserati 250F next to Cooper Maserati T51 in the garage.

Gerry Hann's Maserati 250F and the very pretty Cooper Maserati T41 owned by Chris Wilson wait out the rain in the garage.

The majority of the drivers are members of the Historic Grand Prix Cars Racing Association which has races throughout Europe where historic racing enthusiasts are dedicated to keeping alive the spectacle of the Grand Prix race cars in action. 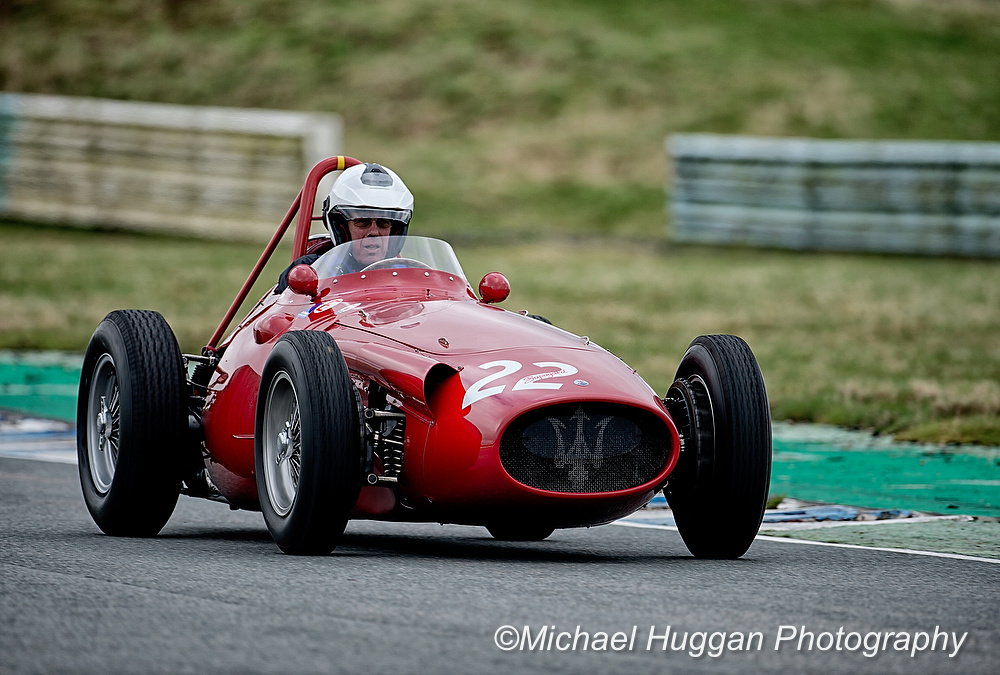 Gerry Hann in the Maserati 250F

The rain abated the following day making conditions easier for drivers and the yours truly, but, alas, no sunshine to brighten up the pictures. I moved to other locations around the circuit obtaining a selection of shots. 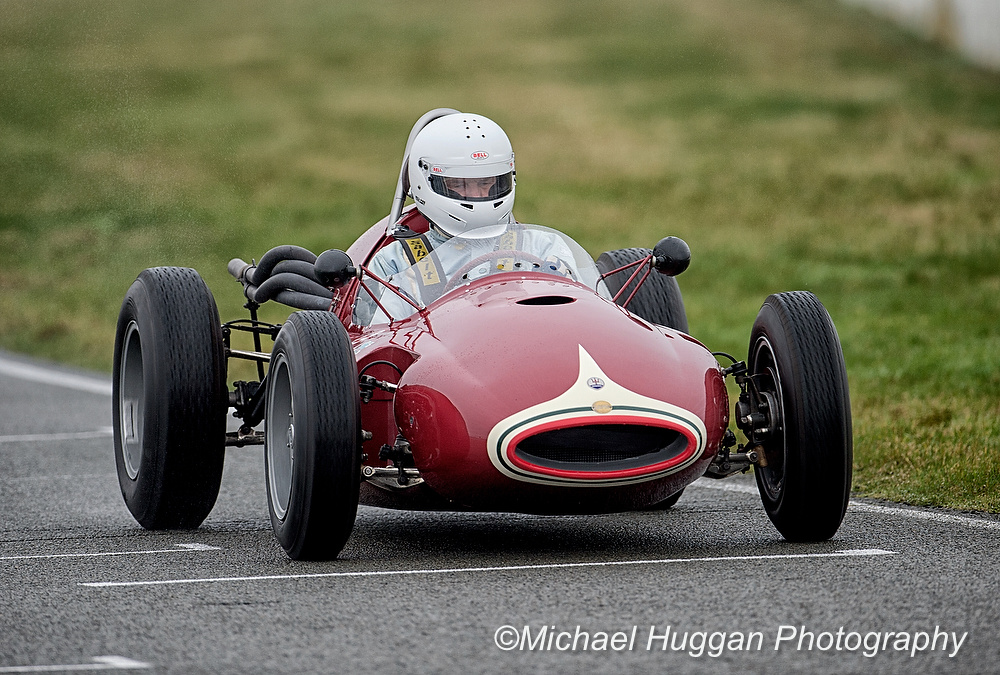 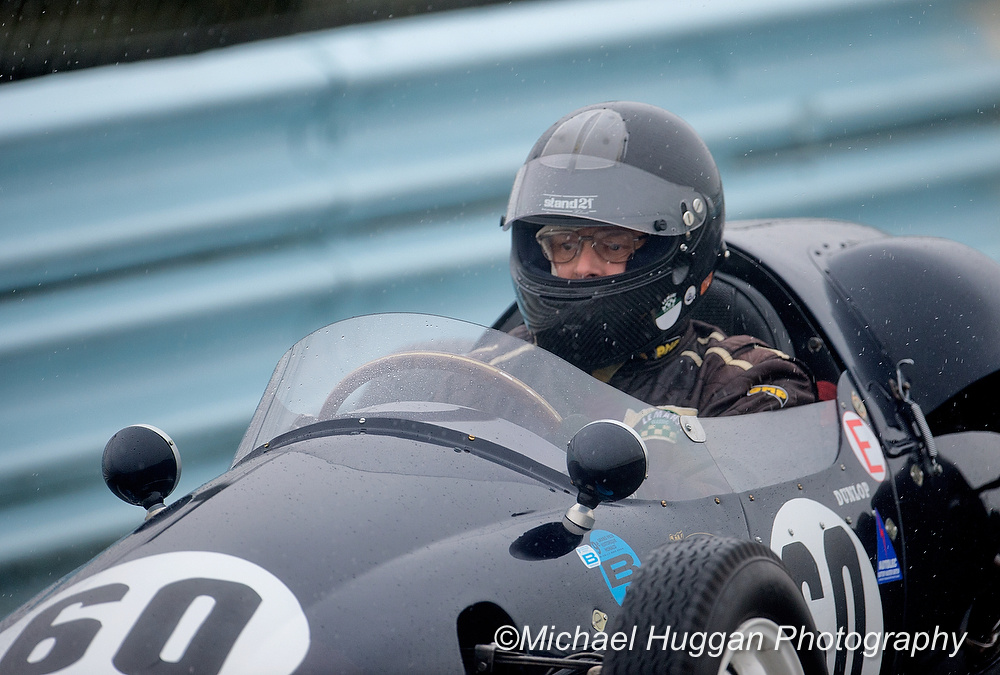 Steve Hart drives the Cooper Climax T41 back into the pits 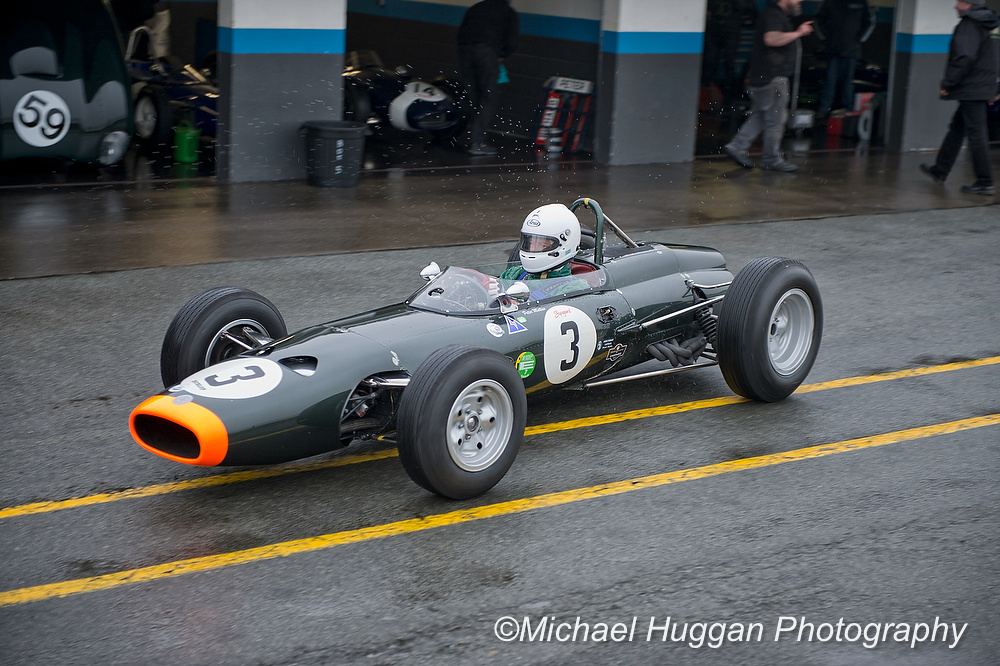 Peter Mullen in his BRM P261 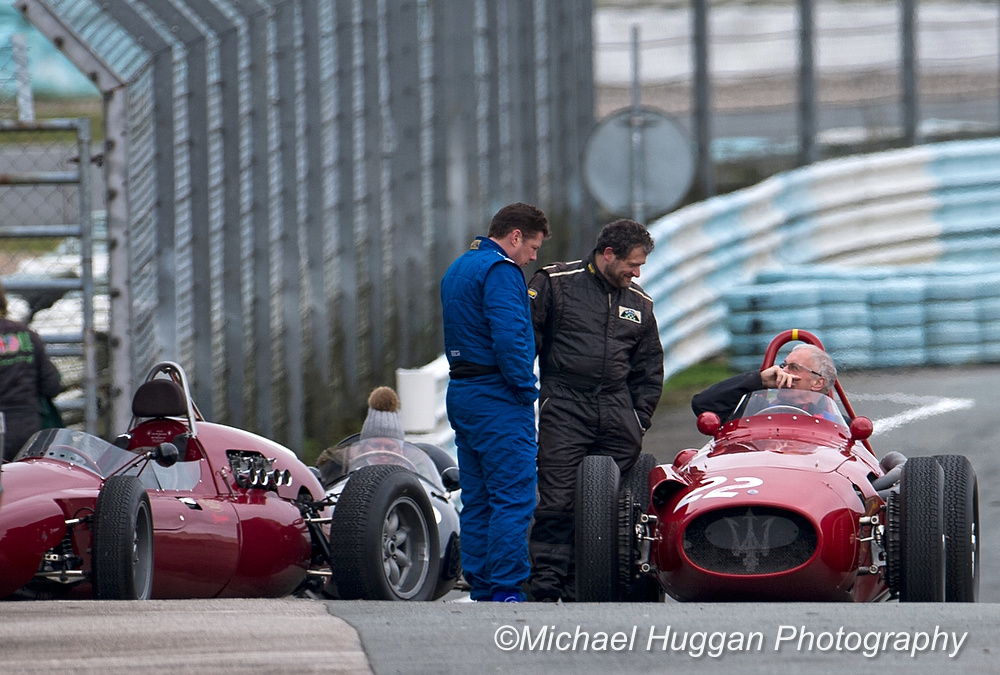 Elliott Hann (left), Steve Hart (middle) and Gerry Hann sitting in his Maserati 250F after his last run of the day. 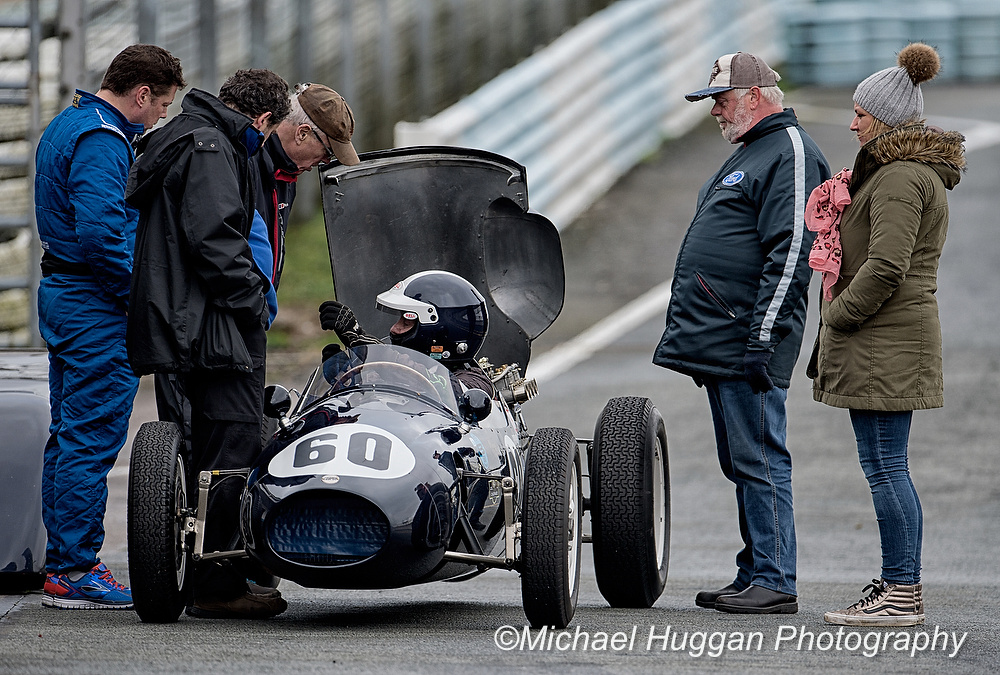 Sid Hoole in Gerry Hann's Cooper Climax T41 offers his observations after a couple of laps on the circuit. 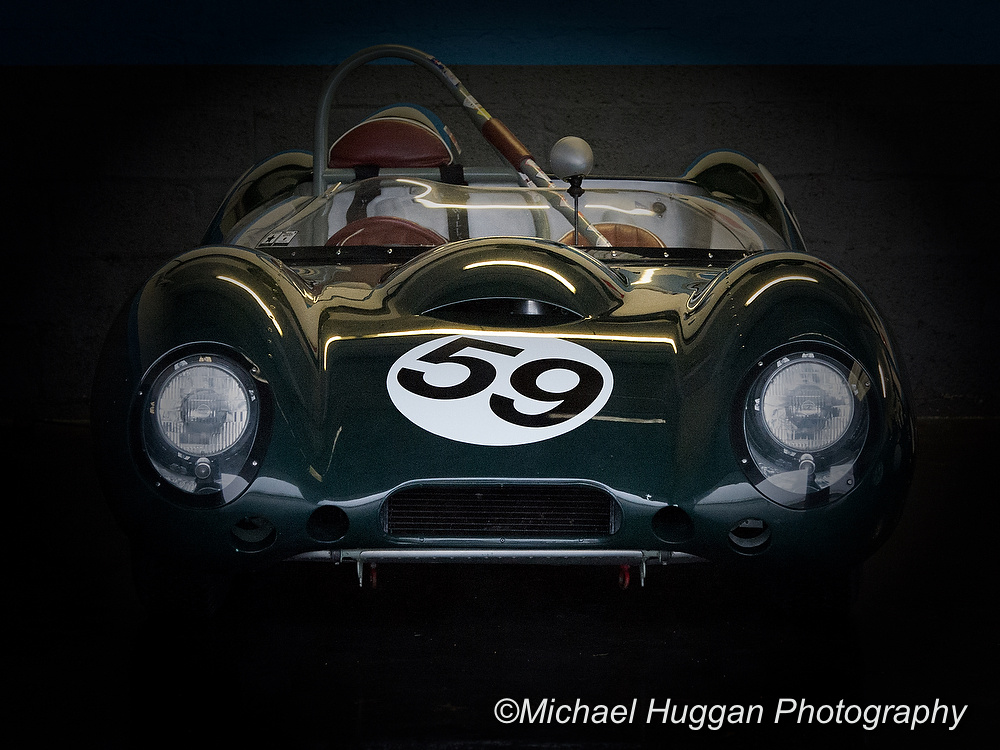 This is one of my favourite images from the two days at the circuit.   I could see the picture in my mind before I took the shot and under exposed the image,  plus adding a 'Vignette' in post processing. A good "arty" shot.

My thanks to Sid Hoole for staging such an enjoyable few days, Gerry Hann for providing transport and all the drivers and teams for their dedication and good spirits in arduous conditions.

For more images of the two days events please see my website here.